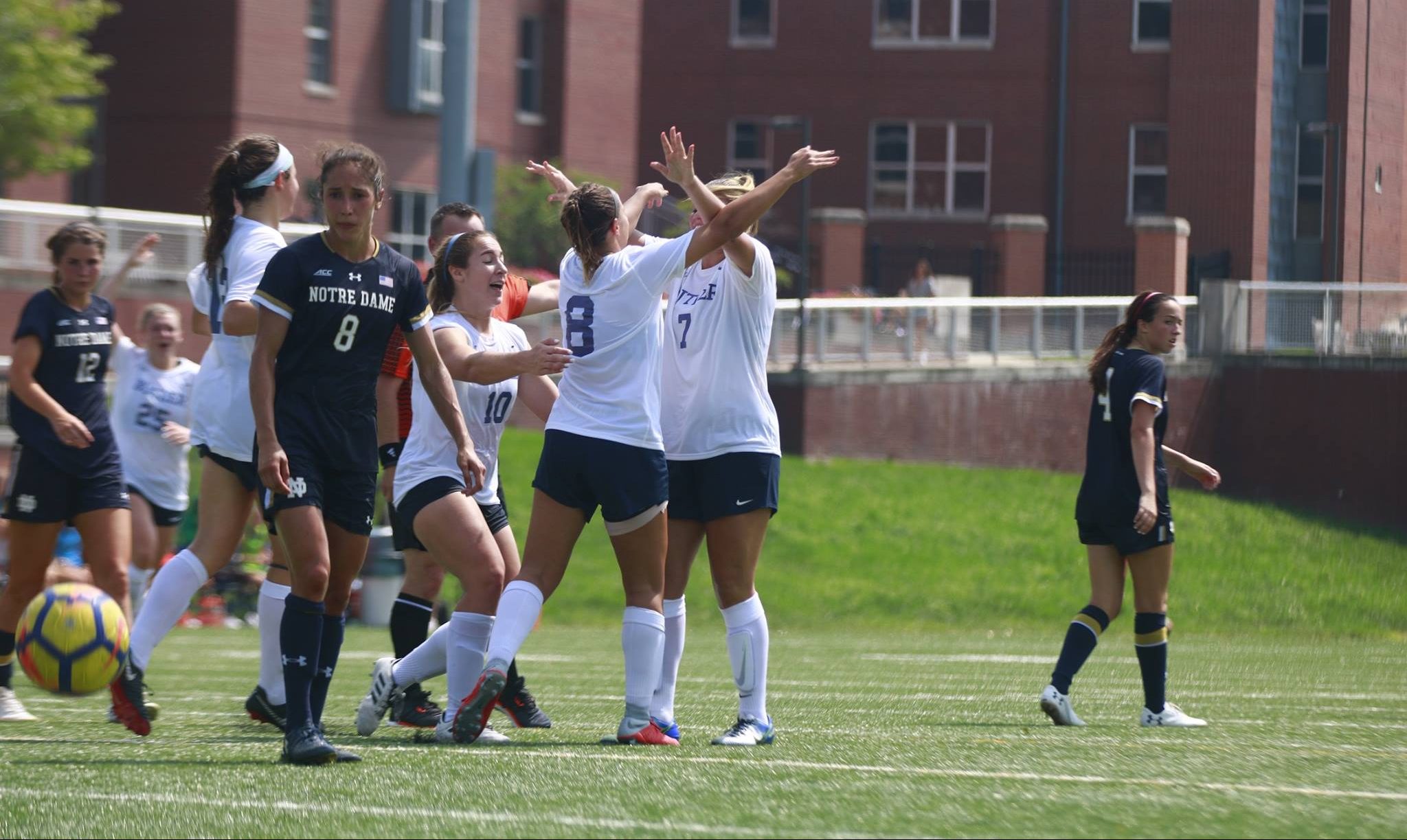 It didn’t take long for one of them to strike.

Nine minutes into their collegiate debut against Kent State, the freshman duo had Butler women’s soccer on the board for the first time.

Cassidy Blacha served a ball into the left side of the box where freshman forward Anja Savich found for a half-volley shot that blasted into the bottom right corner.

“I was freaking out and really scared, but I knew I had to do something and do my part for the team because they were expecting a lot out of me,” Savich said. “Scoring off the bat was amazing and a great feeling. The team’s support was just awesome.”

After Kent State tied the game three minutes later, the second half of the duo struck again just before halftime.

In the 41st minute, freshman midfielder Morgan Kloosterman netted her first goal on a long throw-in that took a bounce in the box. Savich added insurance with a put-back shot in the 55th minute to cap off a 3-1 victory for Butler and a three-goal performance for Savich and Kloosterman.

Their debut in a Butler uniform was no fluke for the Michigan natives. In the team’s next match against IUPUI, Kloosterman and Savich were responsible for the the team’s two goals in a 2-0 victory over the Jaguars.

The duo scored six of the first nine goals by Butler this season and Savich’s four goals currently lead the team. Kloosterman sits second on the team with three goals on the season.

“As a senior, it makes me wish I could be here longer because of what they provide. It’s truly impressive what they do,” senior forward Paige Monaghan said. “They have already shook off that freshman image and have become solid role players for the team.”

While they’re similar in regards to their contribution on the field, Savich and Kloosterman’s personalities could not be more different off the field.

As co-head coach Rob Alman puts it, Savich, a very outspoken person, is almost brash — but in a way that the team encourages and hopes to use as a motivational tool.

Kloosterman is more soft spoken — a sponge soaking up information, doesn’t back down from a task and gets the job done.

Their similarities lie in what pushes them both on and off the field.

“They’re two very different personalities to be honest, but I think the piece that they both share is just that ultra-competitive nature,” Alman said. “They hate losing at anything and it doesn’t matter what it is. They’re willing to fight and fight and fight.”

For Monaghan, what stands out is the hardworking attitude that Kloosterman and Savich bring.

“I see pure grit when I look at those two,” Monaghan said. “Sometimes it’s hard as a freshman because you learn a lot and you have to absorb a lot, but they are really open to learning and you can always rely on them working hard.”

Kloosterman has found herself in a reserve role for the Bulldogs, a “super-sub” of sorts that comes in an hopes to make an immediate impact. The first three shots of her Butler career all found the back of the net after she came in off the bench.

“The starters usually come out and have a high tempo and make a lot of good runs so for me it’s just trying to continue that and make sure that it’s not a dip in tempo when I come in,” Kloosterman said.

For Alman, Kloosterman’s versatility, not her goal scoring, is what sticks out.

“Morgan is a fantastic all-around soccer player because she can literally go play any position on the field,” Alman said. “We’ve been using her in a slightly different role in terms of playing out wide and it really speaks a lot to her ability.”

Versatility is an asset that goes back to Kloosterman’s club career with Michigan Hawks Soccer Club. Her club playing style eventually prepared Kloosterman for the current role at Butler.

“Coming into the preseason I had trained in all the different positions that I have played in the past, so I’ve really learned how each position works on this team so I think that has really helped me be the player that I am,” Kloosterman said.

Savich, a starter in all but one game so far for the Bulldogs, makes her name from her strength and striking ability, which stood out for the coaching staff during the recruiting process.

“She’s got just an absolute cannon of a shot off both feet, and she’s very accurate with it as well which is really a separation factor,” Alman said. “There’s a lot of players at this level that posses power in their ball striking, but she’s as good as anyone I’ve seen in terms of generating power off both feet.”

In most situations, Savich’s 5-foot-10-inch stature is much bigger than opponents, something she uses to her advantage.

“I’m physically tough and bigger than a lot of people so I really try and use my strength to gain control,” Savich said. “People doubt my speed a lot but I would say playing wise I’m someone you can count on to hold the ball, secure ground and give it to my teammates.”

The Butler women’s soccer team currently sits at 6-3-0 heading into Big East Conference play. Kloosterman and Savich, along with the rest of the freshman class, have played a big part in setting the tone for the 2018 season.

“They’ve been important to our success so far,” Alman said. “I think we’ve got those two and then the other freshman that have come in and made a big impact, not only in the games but in the training environment as well and just pushing the team to be better.”

For Savich, the welcoming culture the program offers to newcomers has played a key role in her smooth transition to the college level.

“They’ve made it easy for us big time. I think we’re all really close so it made it super easy coming in to make an impact,” Savich said. “It’s been so easy for us because they made us feel like we were one of them and not just freshmen.”

Monaghan has seen the duo transition to the college game so quickly as a result of their eagerness to learn and adapt.

“Their willingness to learn and ask the seniors for advice has made it so easy for them to transition.” Monaghan said. “They genuinely care and want to get better to do what they can for the team.”

The strength of the freshman class this year, bodes well for the future of Butler women’s soccer.

“I think it sets us up for a pretty hopeful future,” Kloosterman said. “All of our classes are strong but I think that the freshman class has really come in and put in a lot of work for the team. As the next four years go by hopefully we can continue to have really strong classes and make for a really great team.”